PL 17 is an oil and gas production permit and high-value exploration acquisition that covers 104 km2 (25,700 acres) in the Surat Basin, one of Australia’s first producing basins. It is located in a light-oil discovery trend, and is situated approximately 20 km and on trend with the Moonie Oil Field, which has produced ~25 mmbbl to date. PL 17 contains two undeveloped oil fields, the Bennett and Leichhardt fields, and the production permit area is largely unexplored despite the proven and significant oil and gas potential. 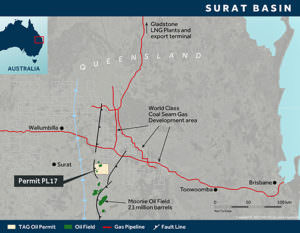 TAG Oil CEO Toby Pierce commented, “On behalf of the team we are all very excited to announce the closing of this acquisition, which is TAG Oil’s second acquisition since the beginning of 2016, and TAG’s first operated asset outside of New Zealand. Similar to our recent Puka acquisition in New Zealand, PL 17 provides TAG with proven production, reserves and attractive exploration prospects in another stable country with the benefit of extensive service and production infrastructure. With the application of modern 3D seismic and production equipment, PL 17 brings immediate value to our portfolio and the potential to deliver substantial development and exploration upside.” (Read a Q&A with Mr. Pierce here.)

The Bennett and Leichhardt fields are both undeveloped oil fields located within PL 17. The fields have produced light oil intermittingly from the Jurassic-aged Hutton Sand and Precipice formations since being discovered in the 1960s, with current production from the Bennett Field of approximately 15 b/d of oil from dated production equipment. TAG plans to develop the fields, as well as drill exploration wells to test structures identified in the Precipice and the Hutton Sand play fairway, the main producing reservoir sands in eastern Australian basins.

PL 17 also has high-impact exploration potential in the deeper Permian formation that has similar characteristics to the United States’ Permian play, and is the primary unconventional tight gas/condensate play opportunity within PL 17. The Permian formation lies approximately 1,000 meters lower than the conventional prospects in PL 17 and is both the source rock as well as the trapping mechanism for potentially significant quantities of oil and gas along the erosional edge. 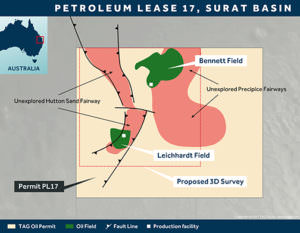 Alex P. Guidi, TAG Oil Chairman commented, “I congratulate the team for identifying this attractive opportunity and completing the PL 17 acquisition on very attractive terms. This represents the perfect stepping-stone into Australia, and supports our vision for further expansion in Australasia. Over the past seven years, TAG has grown in a very significant way, completing six distressed asset acquisitions and one corporate acquisition during the 2009 and present industry downturn. This has resulted in the accumulation of eight new field discoveries under operatorship and a compelling Australasian growth platform with a diverse suite of assets, combining reserve-building, high netback production, and drill-ready exploration targets in proven high-impact discovery fairways. I am confident that our team will create even greater shareholder value through further acquisition and by unlocking the significant resource development and exploration upside that has been demonstrated across our entire oil and gas portfolio.” 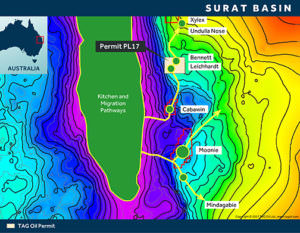 TAG’s initial work plans at PL 17 include mechanical enhancements to the existing dated production equipment and the acquisition of 70 km of 3D seismic over the most prospective area of the block. This 3D seismic program will better define structures and prospects that exist in the Hutton Sand and Precipice oil fairways, and give TAG a better understanding of the deeper Permian tight gas/condensate potential. This work program is expected to commence in April 2017 and will be followed with a multi-target drilling campaign.

As previously announced on October 31, 2016, the acquisition was subject to several conditions including obtaining all necessary government approvals, which have now been met. As a result, the initial payment of AUD$750,000 (less an initial AUD$40,000 deposit) has been released from escrow and transferred to Southern Cross. Further payments to Southern Cross are as follows:

Certain information in this document may constitute “analogous information” as defined in NI 51-101, including, but not limited to, information relating to areas with similar geological characteristics to the lands held by the Company. Such information is derived from a variety of publicly available information from government sources, regulatory agencies, public databases or other industry participants (as at the date stated therein) that TAG believes are predominantly independent in nature. TAG believes this information is relevant as it helps to define the reservoir characteristics in which TAG may hold an interest. TAG is unable to confirm that the analogous information was prepared by a qualified reserves evaluator or auditor and in accordance with the COGE Handbook. Such information is not an estimate of the reserves or resources attributable to lands held or to be held by TAG and there is no certainty that the reservoir data and economics information for the lands held by TAG will be similar to the information presented therein. The reader is cautioned that the data relied upon by TAG may be in error and/or may not be analogous to TAG’s land holdings.