Vancouver, B.C. – February 13, 2017 – Oil and gas exploration and production company, TAG Oil Ltd. (TSX: TAO and OTCQX: TAOIF) is pleased to report third quarter results for the fiscal year ending March 31, 2017, in which oil and gas production, revenue from sales, and operating netbacks increased. Production over the month of February to date is above guidance with a current net daily average rate of 1,293 BOE/d (79% oil).

TAG remains disciplined and focused on optimizing and exploiting opportunities within the Company’s core producing operations, which has demonstrated substantial upside potential for near-term production and reserve building, and completing additional acquisition opportunities in New Zealand and Australia. TAG is also set to resume drilling on March 1, 2017, and enter its next phase of reserve and production growth through exploration, exploitation, and commercializing the deep Cardiff gas/condensate discovery, one of TAG’s premier deep gas assets in New Zealand.

TAG Oil CEO Toby Pierce commented “I am very pleased to report another successful quarter for TAG with stable production base and higher oil prices leading to improved revenues and netbacks. TAG’s operations continued to remain active with workovers at our core Cheal and Sidewinder fields delivering incremental production, while successful well tests at both Supplejack and Cardiff have demonstrated near term development opportunities. Further, preliminary results from the Cheal B waterflood are encouraging and we will be further expanding the waterflood to Cheal A and Cheal E in the upcoming months. Finally, going forward we expect to shift back towards a more growth oriented trajectory focusing on drilling and exploiting our exceptional higher impact exploration inventory.”

The Cheal B Mt. Messenger pool has been identified as the first phase of a larger waterflood project within the greater Cheal area. TAG’s enhanced recovery waterflood project commenced on September 21, 2016, and water injection continues at a rate of approximately 700 BW/d. The pressure response in the reservoir is being monitored and TAG expects to see a production response from water injection in calendar 2017.

The Cheal A Mt. Messenger pool waterflood project has progressed with the implementation of the Cheal-A2 injection conversion project that is expected to be completed during Q1 2018. Pressure support is expected to double the recovery factor, resulting in incremental production and reserves.

Execution of the waterflood project at the Cheal E site continues, with pipeline construction completed in Q3 2017. The completion target date is the end of Q4 2017. This will involve the provision of additional pumps and associated equipment, as well as converting the Cheal-E7 well into an injection well. In addition, the joint venture submitted an application in early November 2016 to New Zealand Petroleum and Minerals to convert Cheal E from an exploration license to a mining license. This will allow the joint venture to commence water injection into the Cheal E pool upon receipt of the mining license.

Options to commercialize both the Cardiff-2 and Cardiff-3 wells are currently being considered in order to support production via tie back to TAG’s nearby Cheal A facility will progress in Q4 2017. The Cardiff structure is approximately 3 km by 12 km in extent and has potential to contain a large high-liquids gas resource. The Cardiff field is situated nearby and on trend with onshore New Zealand’s landmark Kapuni discovery. 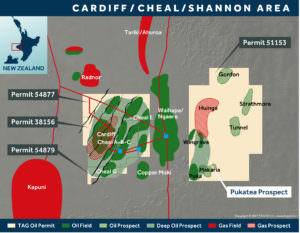 TAG Oil (70%) and its joint venture partner, Melbana Energy Ltd. (30%), have approved drilling of the Pukatea-1 well, located onshore in New Zealand within PEP 51153 (“Puka”), which is planned to commence in Q3/Q4 2018. The Pukatea prospect is a high impact exploration opportunity, targeting the Tikorangi Limestone, a highly productive conventional reservoir with initial flow rates of 5,000 to 10,000 B/d in nearby wells. The Puka joint venture has recently upgraded the prospective resources attributable to the Pukatea prospect, which are estimated to range from 1.3 to 40 million barrels (low-high estimates) with a best estimate of 12.4 million BOE. The chance of success for Pukatea has also been revised upward from 16% to 19%. The Pukatea prospect is proximal to existing infrastructure and has several low-cost alternative development paths. The Pukatea-1 well will be drilled from the existing Puka production pad where the previous operator has previously drilled three wells.

A low-cost perforation of a deeper zone in the existing Sidewinder-1 wellbore enabled access to a previously unproduced oil leg resulting in additional production. On that success, a further workover on the Sidewinder-2 well has been progressed and is scheduled to be completed in Q4 2017. It is expected that this will add approximately 85 BOE/d to production. Several additional gas wells at Sidewinder and Cheal continue to be reviewed as candidates for recompletions as oil producers.

The resource estimates in this document are by TAG professionals, a non-independent qualified reserves evaluator, in accordance with NI 51-101 and the COGE Handbook, with effective dates of November 30, 2016, and December 1, 2016.

The significant positive factors that are relevant to the resource estimate are: proven production in close proximity; proven commercial quality reservoirs in close proximity; oil and gas shows while drilling wells; and calculated hydrocarbon pay intervals from open hole logs.

The significant negative factors that are relevant to the resource estimate are: tectonically complex geology could compromise seal potential; and seismic attribute mapping can be indicative but not certain in identifying proven resource.