Vancouver, B.C. – September 29, 2016 – Oil and gas exploration and production company, TAG Oil Ltd. (TSX: TAO and OTCQX: TAOIF, “TAG”), is pleased to provide the following update on its operations in the Taranaki Basin of New Zealand.

As reported in TAG’s August 15, 2016 press release, a low-cost recompletion to an existing wellbore at Sidewinder demonstrated the potential of a previously unproduced oil leg following testing. Since August 18, 2016, when equipment was installed allowing for 24-hour oil production, the well has been on stabilized flow at an average of approximately 180 B/d. One additional well at Sidewinder and several gas wells at Cheal are now being reviewed as candidates for recompletions as oil producers. It is anticipated that the Sidewinder-2 well recompletion and perforation operations will add an additional 100 b/d of production.

Further, due to recently discovered mechanical issues in the B5 well, an additional 85 BOE/d remains offline. Following the E5 rod pump installation, operations will move to B5 to suspend the well and consider options to return it to production. Finally, the gas compressor at the main Cheal production station is offline following a recent issue with the engine. The compressor is expected to be repaired and back online by mid-October. Much of the gas is currently used as fuel for power generation, however a moderate amount is being flared to ensure continued safe operations.

TAG’s enhanced recovery waterflood project commenced on September 21, 2016, with the start of water injection at the Cheal-B3 well at a rate of 400 BW/d. The water injection rate will be increased and the pressure response in the reservoir will be monitored. TAG estimates that it could take six to nine months to see a production response from water injection.

A small scale water flood at the Cheal-A3X well has already shown potential to enhance the recovery of oil in TAG’s Cheal permits. Following the start of water injection, production rates increased over 43 months followed by a slower decline than previously seen on primary production.

The recently recompleted water well at Cheal-A9 is capable of producing approximately 4,500 barrels of water per day which is currently expected to be more than sufficient to meet water injection demands at all three potential injection sites. 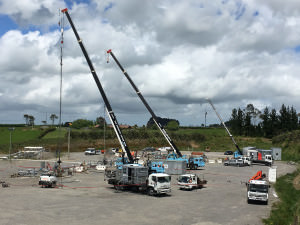 At the Cheal E site, a workover is currently underway to install a rod pump at the Cheal-E5 well which has been shut-in since May 2015. Start-up is forecast for the first week in October and once operational, the well is expected to produce approximately 70 BOE/d (gross). In addition, the Joint Venture expects to submit an application to New Zealand Petroleum and Minerals to convert Cheal ‘E’ from an exploration license to a mining license by the end of October. This will allow the Joint Venture to commence water injection into the Cheal ‘E’ pool upon receipt of the mining license.

Toby Pierce, CEO of TAG Oil commented, “I am pleased to report the start of full time oil production from Sidewinder, which has demonstrated the potential for additional oil recompletions. Further, the start of water injection at the Cheal ‘B’ pool marks the first application of enhanced recovery techniques on our assets in the Taranaki Basin. Together, these two milestones demonstrate upside in TAG’s core assets and the ability of TAG to grow its production organically at low cost in the current oil price environment. As for the issues with the compressor and the Cheal-B5 well, we expect minimal impact to overall cash-flow given that both predominately impact gas production and only by a moderate amount.”