Mr. Guidi commented: “As an established oil producer and reserve-based, high-impact exploration company, TAG is poised for future growth internationally. The Company enjoys the benefits of a diverse suite of attractive drill-ready opportunities situated in the prolific Taranaki-region discovery trend, underpinned by high netback production and core oil field development, which has been substantially de-risked over the past four years. My mandate as interim CEO is to capitalize on TAG’s strong position, with a view to drive shareholder value, while at the same time, ensure that the capital markets better understand TAG’s deep value relative to its peer group companies. Personally, I’m excited by the many corporate and operational opportunities this presents, and look forward – with the help of our excellent corporate and operating teams in both Canada and New Zealand – to take TAG through the next stage of corporate growth.”

Mr. Guidi is a significant shareholder in TAG, and his oil and gas investments in New Zealand date back to 1993 when he founded Indo-Pacific Energy Corp. and Trans-Orient Petroleum Corp. Mr. Guidi’s efforts paved the way for more than $300 million to be invested into New Zealand’s petroleum sector – which resulted in oil and gas discoveries, production interests, infrastructure – and operated several joint ventures, which attracted numerous international explorers to New Zealand’s petroleum sector. 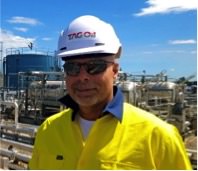 Mr. Guidi (56) is a successful international oil and gas entrepreneur, and founder and CEO of the industry holding company, International Resource Management Corp. (IREMCO). Upon its inception in 1989, the IREMCO group of companies expanded rapidly by acquiring and operating extensive oil and gas exploration concessions and production interests around the world, including Canada, Argentina, Peru, China, Australia, New Zealand, Papua New Guinea and in the Indonesian-Australian Timor Sea Gap.

Some of the IREMCO group companies have ranked among North America’s best performing independent oil and gas companies in the past years, attracting more than 20,000 stockholders worldwide. Under Mr. Guidi’s leadership, the IREMCO group of companies experienced significant shareholder value creation, growing from an initial market capitalization of less than $300,000 to reach a cumulative market capitalization of more than a billion dollars, with listings on senior North American exchanges.

Mr. Guidi began his career in the oil industry as a drilling roughneck. In the late 1980s, he was an early adopter of the then-revolutionary horizontal drilling technology for mature oil fields in South East Saskatchewan, playing a key role in transforming Williston Basin-focused Walking Stick Oil and Gas Ltd. into an operator, producer, and development-stage entity that was later acquired by Bonavista Petroleum.

TAG Oil Ltd. (https://tagoil.com/) is a Canadian-based development-stage oil and gas company with extensive operations, including production infrastructure, in the Taranaki region of New Zealand. As one of New Zealand’s leading operators, TAG is poised for long-term, reserve-based growth, and is positioned with attractive exploration activities in the lightly explored Taranaki Basin discovery fairway. As a low cost, high netback oil and gas producer, TAG is debt-free and reinvests its cash flow into development and step-out drilling along trend with the Company’s existing production.