Growing TAG’s oil production from its core Taranaki Basin oil field development area has been – and will continue to be – a priority, and has been trending consistently upwards for an extended period of years. TAG’s shallow Miocene drilling focus, which has been substantially de-risked through extensive 3-D seismic coverage and drilling over the past four years, will help fuel TAG’s reserve-based growth in Taranaki. The Company also expects growth to come from drilling success on attractive shallow and deep formation prospects along trend with existing oil and gas discoveries in Taranaki.

“I commend the TAG Oil team for achieving a good result over the quarter, while reducing costs and identifying optimization opportunities,” commented Alex Guidi, TAG Oil Chairman. “Although we are reducing the level of high-risk capital expenditure, TAG controls a quality, long-term development-stage asset, producing premium-priced (Brent) light oil with substantial remaining development, appraisal and exploration upside in multiple proven producing formations. When oil prices improve, should markets become more favorable, or should other opportunities arise, TAG is in position to increase the level of exploration activity.” 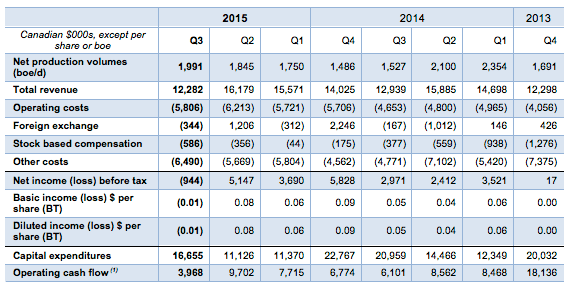 (1) Operating cash flow is a non-GAAP measure. It represents cash flow from operating activities before changes in working capital 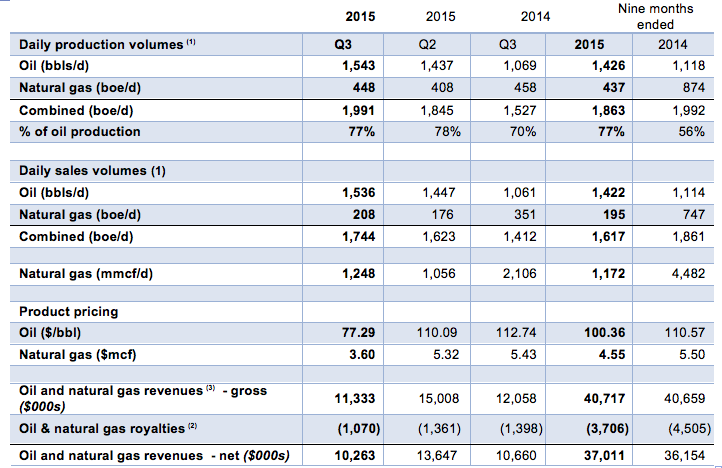 1) Natural gas production converted at 6 Mcf:1BOE (for BOE figures)
2) Relates to government royalties and includes an ORR of 7.5% royalty related to the acquisition of a 69.5% interest in the Cheal field
3) Oil and Gas Revenue excludes electricity revenue related to Coronado Resources 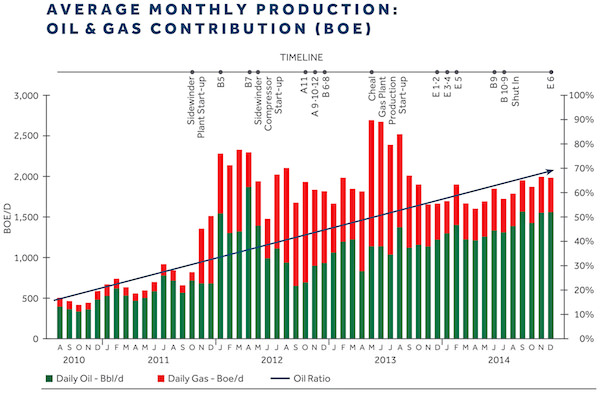 TAG is a low cost, high netback oil producer that maintains a strong financial position. The Company anticipates moderate growth of the company’s cash position, production and reserve additions over the coming quarters as it funds a conservative development drilling program over its core producing properties. At the end of the quarter, TAG had a cash position of $31 million with no debt and there are currently 62,597,852 shares outstanding.

Over many years now, TAG has invested a considerable amount of capital into high-risk / high-reward exploration expenditure outside of the Company’s Taranaki oil and gas field development acreage in search of a large new field or major unconventional frontier discovery. Given that commercial success has not as of yet been achieved from these capital-intensive exploration efforts, to adapt to the new oil price environment, TAG anticipates scaling back the exploration activities that do not meet its risk tolerance.

As announced in November 2014, TAG’s capital budget for fiscal year 2015 was reduced to $43 million, however further reductions are being considered as part of the ongoing review of capital programs. As recorded in TAG’s MD&A, the Company has capital commitments of just under $76 million over the next twelve months with capital spending previously budgeted of approximately $85.5 million over the next eighteen months. The capital expenditure budget has now been amended as follows:

** The Company has applied for necessary approvals to alter and/or extend commitments on certain exploration properties and in some cases, if approvals are not granted and suitable joint –venture partnerships are not concluded, the Company may choose to relinquish the exploration permit.
* Budgeted commitments assumes meeting all planned exploration commitments combined with drilling six non-committed Taranaki development wells per year.

TAG Oil is also pleased to announce that Mr. Brad Holland, a highly experienced oil and gas engineer, will join the Board of Directors of the Company on March 1, 2015. He will replace Dr. Douglas Ellenor whose resignation for personal reasons will become effective on that date as well.

Mr. Holland holds a B.Sc. Chemical Engineering degree from the University of Alberta and has more than thirty years of experience and expertise in the planning, design and project management of oil and gas industry projects, which includes eighteen years as Senior Project Engineer for Saudi Aramco, a global leader in oil and gas. Over the course of his career, Mr. Holland has been responsible for the design and management of multiple oil and gas large diameter pipeline projects around the world, and he will be an integral addition to TAG Oil’s Board as the Company embarks on the next phase of development. Effective March 1, 2015, TAG Oil’s Board will consist of Alex Guidi, Keith Hill, Ken Vidalin and Brad Holland.

Mr. Guidi commented, “I wish to personally thank Douglas Ellenor for his short but valuable contribution to TAG, and his positive technical view of TAG’s Taranaki Basin operations. I also welcome Mr. Holland’s extensive engineering and production infrastructure expertise. Along with our other Board members, we collectively bring many years of oil and gas, corporate and entrepreneurial experience to TAG.

“Additionally, I would like to note that TAG’s outgoing management, Messrs. Johnson and Cadenhead were integral in transforming TAG from an exploration-centric company to a well-heeled development-stage producing company, with a qualified technical and operational team in place capable of exploiting the substantial upside potential from TAG’s oil and gas assets, which has left the Company in a favourable position during this current down cycle to be able to consider new opportunities and strategies for shareholder growth.”

TAG Oil Ltd. (https://tagoil.com/) is a Canadian-based development-stage oil and gas company with extensive operations in New Zealand. With 100% ownership over its core producing assets, including production infrastructure and associated pipeline, TAG is managing organic growth and shareholder value creation through development of its oil and gas discoveries. As New Zealand’s leading explorer, TAG is focused on increasing reserves and high netback oil production from low-risk oil field development and exploration prospects prospective for oil and gas discovery in the Taranaki region of New Zealand.

TAG Oil’s netback is the operating margin that it receives from each BOE sold. The method of calculation that was used to determine the netbacks that are disclosed in this release were calculated by subtracting TAG Oil’s royalty, transportation, storage and production costs from its revenues.