TAG’s near-term focus is on low-expenditure, in-field production optimization opportunities which have been identified to lift production. In addition, an extensive geotechnical and engineering review is being completed over TAG Oil’s Taranaki development and exploration acreage with a view to initiate the next round of drilling on the Company’s operated Cheal and Sidewinder Exploration and Development acreage later this year.

The Cheal oil field continues to provide TAG with a stable, high-netback production base and long-life reserves, with revenue capable of funding drilling costs while building production and reserves. 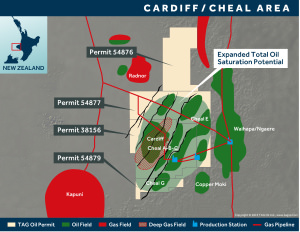 TAG plans to fully develop the 100%-controlled Cheal oil and gas field, which has been substantially de-risked by the 36 wells drilled to date across the field. Permit-wide 3D seismic coverage indicates the entire Cheal permit area is target rich, with more than 70 development drilling locations that have been identified and high graded. Encouraging results continue to be achieved at Cheal including in the Cheal East area, where the naturally free flowing Cheal-E1 well (TAG: 70%) has been producing gross volumes of 500 to 600 boe/d (82% oil) on choke for 16 months. With drilling and completion costs of under US$3 million per well, it gives an indication of the unrecognized upside and robust economic potential that exists within TAG’s acreage.

TAG’s 100% controlled mining permit, PMP 38156, where the Company’s Cheal oil field is located, also contains the large Cardiff structure of the deeper Kapuni Group formations, which is on trend and geologically similar to the large legacy deep gas condensate fields that have been discovered in the Taranaki Basin.

In December 2013, TAG completed drilling of the Cardiff-3 well, which was drilled to a total depth of 4,863 meters and intercepted 230 meters of gas and condensate bearing sands in three target zones within the Kapuni Group. The deepest of the three zones, the K3E was perforated and hydraulically fractured. It produced gas and condensate with no formation water, but at sub-commercial rates. Independent expert analysis of the results has concluded that either the fracture stimulation was ineffective because of a poor cement bond over the K3E interval, or skin damage must exist in the near wellbore area, restricting flow. As a result TAG is completing engineering, design and associated planning to recomplete and fracture stimulate a series of other Kapuni group (deep) formations identified within the wellbore. 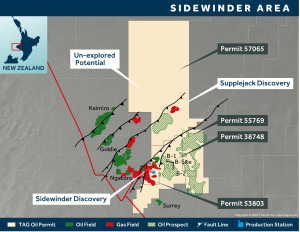 he Sidewinder acreage provides TAG with the opportunity to potentially develop another field similar to Cheal and the adjacent the Ngatoro/ Kaimiro field, which is a 60-million barrel oil field and is a close analogue to the potential contained within TAG’s Sidewinder acreage and TAG’s Cheal field. TAG has now assembled a 22,000-acre exploration play area around its Sidewinder gas discovery and plans to commence drilling of the SW-1B and SW-2B wells later in the year. Both wells will target oil-prone prospects in the Miocene-aged, Mt. Messenger formation at approximately ~2000 meters depth. To date, TAG has drilled seven shallow gas wells on the Sidewinder A site, however these new wells will target the oil potential identified within the Sidewinder B area.

TAG Oil Ltd. (https://tagoil.com/) is a Canadian-based, development-stage oil and gas company with extensive operations—including production infrastructure—in the Taranaki region of New Zealand. As one of New Zealand’s leading operators, TAG is positioned with attractive exploration activities in the lightly explored Taranaki Basin production fairway, and poised for reserve-based growth. As a low cost, high netback oil and gas producer, TAG is debt-free and reinvests its cash flow into development and step-out drilling along trend with the Company’s existing production