Vancouver, B.C. – June 19, 2018 – TAG Oil Ltd. (TSX: TAO and OTCQX: TAOIF) confirms that ERC Equipoise Ltd. (“ERCE”), a qualified reserves evaluator in accordance with National Instrument 51-101 and the Canadian Oil and Gas Evaluation Handbook, has completed its independent reserves assessment on the Company’s producing oil and gas assets within the Cheal (PMP 38156), Cheal East (PEP 54877) and Sidewinder (PMP 53803) permits in New Zealand. This report is dated and is effective as at March 31, 2018. 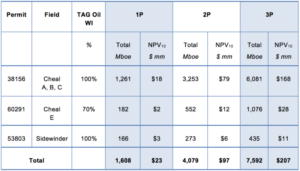 * The reserves and values are gross working interest and pre-tax.

Toby Pierce, CEO commented, “I am pleased with the reserves and resources that were added due to the waterflood program at the Cheal East permit. We continue to be encouraged by the potential increase in the overall field recoveries from the waterflood. I am also pleased with the increase in 2P NPV 10% after tax valuation to $96.1 million that was up from $78.3 million in the previous year despite the drop to US$68/b from US$70/b in ERCE’s long term Brent oil price forecast year on year.”

Statements contained in this news release that are not historical facts are forward-looking statements that involve various risks and uncertainty affecting the business of TAG Oil. Such statements can generally, but not always, be identified by words such as “expects”, “plans”, “anticipates”, “intends”, “estimates”, “forecasts”, “schedules”, “prepares”, “potential” and similar expressions, or that events or conditions “will”, “would”, “may”, “could” or “should” occur. All estimates and statements that describe the Company’s plans relating to the Dividend and Coronado are forward-looking statements under applicable securities laws and necessarily involve risks and uncertainties. Actual results may vary materially from the information provided in this release, and there is no representation by TAG Oilthat the actual results realized in the future will be the same in whole or in part as those presented herein.

Other factors that could cause actual results to differ from those contained in the forward-looking statements are also set forth in filings that TAG Oiland its independent evaluator have made, including TAG Oil’s most recently filed reports in Canada under National Instrument 51-101, which can be found under TAG Oil’s SEDAR profile at www.sedar.com. TAG Oilundertakes no obligation, except as otherwise required by law, to update these forward-looking statements in the event that management’s beliefs, estimates or opinions, or other factors change.