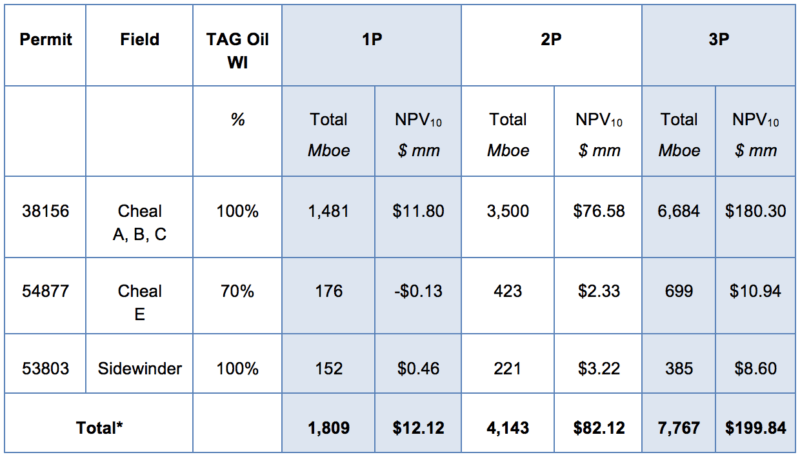 * Due to rounding, certain numbers presented in this table may not add up precisely to the totals provided.

Toby Pierce, CEO commented, “I am very pleased with TAG Oil’s reserve additions in fiscal 2017.  Not only did we replace our production, but we also managed to increase reserves through our field activities without drilling a conventional production well. The Company is well placed to grow our asset base over the next year and beyond as we move on to the second of up to five exploration wells following the successful completion and tie-in of the Cheal-E8 conventional oil well. Despite the recent weaker Brent oil prices, TAG Oil continues to maintain a strong balance sheet, positive cash flow and an active work program over the remainder of fiscal 2018.”

Statements contained in this news release that are not historical facts are forward-looking statements that involve various risks and uncertainty affecting the business of TAG Oil. Such statements can generally, but not always, be identified by words such as “expects”, “plans”, “anticipates”, “intends”, “estimates”, “forecasts”, “schedules”, “prepares”, “potential” and similar expressions, or that events or conditions “will”, “would”, “may”, “could” or “should” occur. All estimates and statements that describe the Company’s plans relating to the Dividend and Coronado are forward-looking statements under applicable securities laws and necessarily involve risks and uncertainties. Actual results may vary materially from the information provided in this release, and there is no representation by TAG Oil that the actual results realized in the future will be the same in whole or in part as those presented herein.

Other factors that could cause actual results to differ from those contained in the forward-looking statements are also set forth in filings that TAG Oil and its independent evaluator have made, including TAG Oil’s most recently filed reports in Canada under National Instrument 51-101, which can be found under TAG Oil’s SEDAR profile at www.sedar.com. TAG Oil undertakes no obligation, except as otherwise required by law, to update these forward-looking statements in the event that management’s beliefs, estimates or opinions, or other factors change.