Testing of the Supplejack-1 well commenced on November 2, 2016 and tested at flow rates of over 7 mmscf/d before being restricted due to equipment constraints. Wellhead pressures during the test were sustained at over 1,000 psi. Testing of the well will continue in an effort to determine resource in place estimates, optimal production rates, and the most suitable commercialization strategy.

The Supplejack-1 well was initially drilled in 2005 and completed in what was identified by well logs as an oil bearing zone. However, the well failed to produce oil commercially and was subsequently suspended. Following a review of existing wells in TAG’s portfolio, re-analysis of the logs identified the potential to recomplete the well in an upper zone interpreted to contain by-passed gas pay. Further, there are several exploration prospects nearby that may enhance the potential economics and expand the resource of this region. 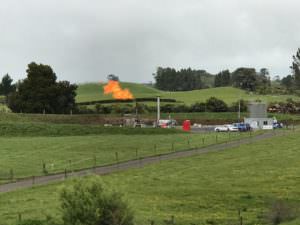 Toby Pierce, CEO of TAG Oil commented, “I am very pleased with the results of the Supplejack-1 well, which
once again demonstrates the potential to be unlocked from TAG’s New Zealand assets. Following the recent recompletion in an oil bearing zone at the Sidewinder fleld, this is another low cost workover that may also successfully result in commerical production for TAG from what had previously been a suspended well. We are continuing to identify new opportunities in our Taranaki Basin assets, which have the potential for further production and reserves growth. With our recent acquisition of PL-17 in the Surat Basin of Australia, TAG is well positioned in two proven basins and continues to opportunistically seek ways to deliver accretive growth for shareholders.”