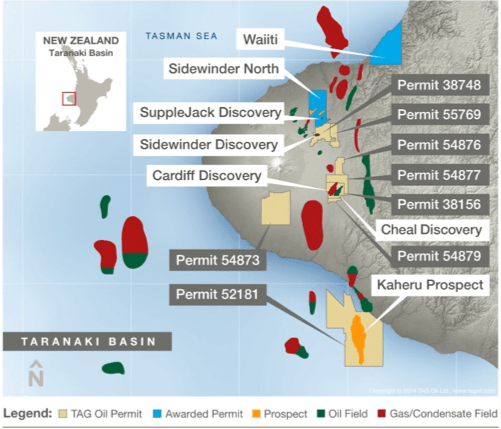 Both permits, which add a combined 36,781 acres to TAG’s Taranaki Basin exploration portfolio, are situated in a prolific oil and gas production fairway in close proximity to producing oil and gas fields. Together with the Company’s existing permits, TAG now operates ten exploration and production permits in the Taranaki Basin, and a total of sixteen permits including a 40% interest in shallow water offshore Taranaki as well as interests in the East Coast and Canterbury Basins.

This new acreage is strategic to TAG while also being highly complementary to TAG’s existing producing operations, production infrastructure and pipeline network, enabling the Company to commercialize future wells in an expeditious manner. More importantly, TAG’s new acreage, which has existing 2D and 3D seismic coverage, expands the scope and potential size of the Company’s successful Mt. Messenger and Urenui Formation drilling program, as well as providing potential for additional deep, high-impact leads that can be analysed over coming years.

The Waiiti permit (22,055 acres), situated in the northern area of the Taranaki Basin, offers the Company the opportunity to explore for both shallow Miocene oil and deep Eocene condensate-rich gas. A prior operator encountered significant elevated gas and oil shows while drilling the historical Pukearuhe-1 well within this new TAG Permit. Waiiti is an intriguing area of the Taranaki Basin in close proximity to the successful Pohokura (offshore) and Mangahewa (onshore) producing fields directly to the west of TAG’s new acreage. The geology of this northern area of the basin is interpreted to have many similarities to the Manutahi/Kauri oil and gas fields in the south part of the basin.

TAG CEO Garth Johnson commented, “We are pleased that New Zealand Petroleum & Minerals offers opportunities on an annual basis, allowing for TAG to add new acreage to the Company’s exploration portfolio. This new acreage falls within TAG’s production back yard in the main Taranaki producing fairway, providing us with the opportunity to expand our core production area.” Mr. Johnson further commented. “Low initial expenditure of less than $100,000 per permit over the first year of the 10-year permit tenure allows TAG to cost effectively add to drilling inventory in coming years within the Company’s core production area.”

Other companies that were recently awarded acreage in New Zealand include US energy giant Chevron, Norway’s Statoil, and the Indian government-controlled ONGC Videsh.

TAG Oil Ltd. (https://tagoil.com/) is a Canadian-based oil and gas company with extensive operations in New Zealand. With 100% ownership over its core producing assets, including production infrastructure and associated pipeline, TAG is enjoying organic growth and shareholder value creation through development of its oil and gas discoveries. As New Zealand’s leading explorer, TAG is focused on increasing reserves and production from low- risk development prospects and high-impact resource plays prospective for large oil and gas discovery in New Zealand.

Cautionary Note Regarding Forward-Looking Statements and BOEs:
Statements contained in this news release that are not historical facts are forward-looking statements that involve various risks and uncertainty affecting the business of TAG. Such statements can be generally, but not always, be identified by words such as “expects”, “plans”, “anticipates”, “intends”, “estimates”, “forecasts”, “guidance”, “schedules”, “prepares”, “potential” and similar expressions, or that events or conditions “will”, “would”, “may”, “could” or “should” occur. All estimates and statements that describe the Company’s objectives, goals, forecasts, guidance, statements regarding prospects being prospective for discovery and/or future plans with respect to the drilling in the Taranaki Basin are forward-looking statements under applicable securities laws and necessarily involve risks and uncertainties including, without limitation: risks associated with oil and gas exploration, development, exploitation and production, geological risks, marketing and transportation, availability of adequate funding, volatility of commodity prices, environmental risks, competition from other producers, and changes in the regulatory and taxation environment. Actual results may vary materially from the information provided in this release, and there is no representation by TAG Oil that the actual results realized in the future would be the same in whole or in part as those presented herein.

Other factors that could cause actual results to differ from those contained in the forward-looking statements are also set forth in filings that TAG and its independent evaluator have made, including TAG’s most recently filed reports in Canada under National Instrument 51-101, which can be found under TAG’s SEDAR profile at www.sedar.com.