Based on the growing oil production trends from its Taranaki Basin operations, TAG is pursuing a number of alternatives with a view to materially grow the Company’s high netback oil production. These include continued low-risk development drilling, low-cost optimization of bypassed oil pay, and acceleration of development and step out drilling in core discovery areas. At the same time, TAG will minimize risk and working capital spent on non-producing assets and seek alternative methods for funding high-risk, high-reward drilling.

TAG CEO Garth Johnson commented, “I am pleased that TAG continues to achieve excellent results, steady oil production growth and organic value creation for our shareholders. We have now recorded four consecutive quarters of increased revenues, generating net income of $5.1 million during the quarter and $8.8 million for the six months to date.” Mr. Johnson continues, “We are proud of these achievements and look forward to leveraging TAG’s strong corporate and dominant operational position in New Zealand. New Zealand is the perfect backdrop for us to grow — where the Company can enjoy the benefits of a high-impact international portfolio without the political risk in other underexplored regions of the world.” 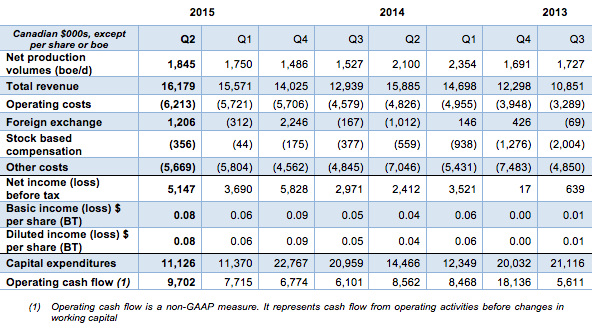 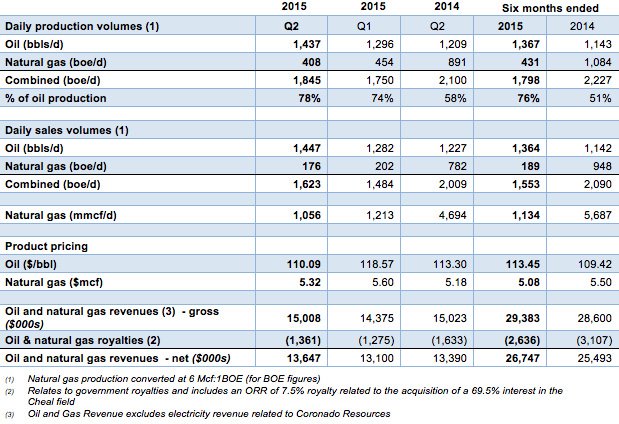 As announced in May 2014, TAG’s capital budget for fiscal year 2015 was $60 million; funded by forecasted cash flow of $40 million for the year and working capital on hand. The Company has amended the capital budget to reduce spending to $43 million for the 2015 fiscal by extending the timing of certain higher risk work commitments to fiscal year 2016/17 in order to maintain a strong balance sheet while continuing to build production as previously guided.

Near-term operations are scheduled as follows:

TAG’s operations to date have met management’s expectations and have provided confirmation of the Company’s ability to grow profitable oil production through a focus on development and appraisal drilling at the Cheal and Sidewinder fields. TAG’s business plan allows management some flexibility that is needed to maintain a strong balance sheet, without sacrificing the Company’s growth objectives by using cash flow to fund low-risk shallow drilling in Taranaki in combination with a higher-risk / higher reward operations when the Company can afford to do so.

TAG also announces the filing of the Company’s unaudited condensed consolidated interim financial statements and management discussion and analysis with the Canadian Securities Administrators relating to results for the Company’s second quarter fiscal 2015 year, ending September 30, 2014. Copies of these documents can be obtained electronically at http://www.sedar.com, or for additional information please visit TAG Oil’s website at https://tagoil.com/.

TAG Oil will host a discussion of its Q2 fiscal 2015 financial results on Monday, November 17, 2014 at 12:00 pm Pacific Time. Please call in ten minutes before the conference call starts and stay on the line (an operator will be available to assist you should you have questions of management during the call). In addition, questions can be forwarded by e-mail in advance to [email protected]

BOEs:
TAG Oil has adopted the standard of six thousand cubic feet of gas to equal one barrel of oil when converting natural gas to “BOEs.” BOEs may be misleading, particularly if used in isolation. A BOE conversion ratio of 6Mcf: 1 Bbl is based on an energy equivalency conversion method primarily applicable at the burner tip and does not represent a value equivalency at the wellhead.

Cautionary Note Regarding Forward-Looking Statements and BOEs:
Statements contained in this news release that are not historical facts are forward-looking statements that involve various risks and uncertainty affecting the business of TAG. Such statements can be generally, but not always, identified by words such as “expects”, “plans”, “anticipates”, “intends”, “estimates”, “forecasts”, “guidance”, “schedules”, “prepares”, “potential” and similar expressions, or that events or conditions “will”, “would”, “may”, “could” or “should” occur. All estimates and statements that describe the Companyâ€™s objectives, goals, forecasts, guidance, production rates, test rates, optimization, timing of operations, increased pace of drilling, statements regarding prospects being drill ready and/or future plans with respect to the drilling and field optimization work in the Taranaki, East Coast and Canterbury Basins are forward-looking statements under applicable securities laws and necessarily involve risks and uncertainties including, without limitation: risks associated with oil and gas exploration, development, exploitation and production, geological risks, marketing and transportation, availability of adequate funding, volatility of commodity prices, environmental risks, competition from other producers, and changes in the regulatory and taxation environment. Actual results may vary materially from the information provided in this release, and there is no representation by TAG Oil that the actual results realized in the future would be the same in whole or in part as those presented herein.