Vancouver, B.C. – August 7, 2014 – New Zealand oil and gas producer TAG Oil Ltd. (TSX: TAO) and (OTCQX: TAOIF) is pleased to announce that the shallow development drilling program and production operations in the Taranaki Basin, New Zealand, remains in line with estimates for oil and gas production averaging approximately 2,000 barrels of oil equivalent per day (80% oil), and cash flow from operations of approximately $40 million for the 2015 fiscal year. This production guidance factors only existing production and wells from TAG’s shallow development drilling in the Taranaki Basin as detailed in TAG’s Press Release dated May 7, 2014. (Or listen to TAG’s investor conference call discussing the Company’s development and exploration program and operations’ details.) 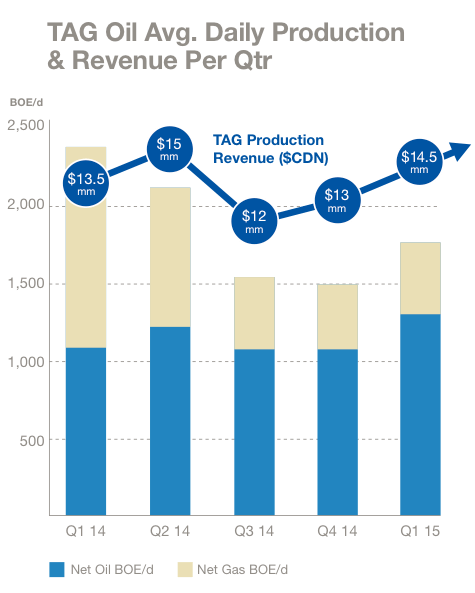 The average net production for the last seven days ending August 4, 2014 was 1,959 BOE/d (80% oil), an increase of 248-BOE/d from June 2014’s monthly average production, due to some flush production from recent testing of new wells drilled at TAG’s 100%-owned Cheal oil and gas field. Almost all of the current production comes from the lightly explored Cheal and Greater Cheal oil and gas field. The Company has in its portfolio, another fifty shallow drill ready prospects identified, and expects that detailed seismic mapping will continue to provide further drilling prospects on this oil-prone trend for many years to come.

Daily production rates for the last three quarters have been stable and growing, with 78% of the daily production coming from high-net back oil production, resulting in strong revenues being generated for Q1/15 (June 30, 2014).

The drop in daily “BOE” production over the past year was primarily due to the decline from the shallow gas discovery at the Company’s 100% Sidewinder oil and gas field. Although a shallow gas development could be further pursued at Sidewinder and remains a valid economic development with a commitment to continued drilling, TAG is now focused on the significant oil-prone exploration potential identified within the Sidewinder acreage.

TAG’s most recently drilled shallow oil wells, Cheal-B9 and B10 (TAG 100%) have now been placed on production. Cheal-B9 is presently shut in for a pressure build-up test after an initial 15-day flow test and Cheal-B10 has completed a 10-day test within a secondary Mt. Messenger zone with encouraging oil production results to date. To date Cheal-B9 and B10 have produced an average of 351 BOE per day (88% oil) during testing.

At the Cheal E site (TAG 70%), TAG’s newest oil discovery area, production for the most recent week averaged 825 BOE/d (577 BOE/d net) with 78% being oil; Cheal-E1 and E4 are flowing naturally, E5 is artificially lifted using a jet-pump. To date, the Cheal E site has produced approximately gross 176,000 BOE (81% oil) since production started in mid-November, 2013. TAG is encouraged by the performance of the Cheal E site area and will conduct additional drilling in this acreage as well as in the Company’s offsetting 100%-controlled acreage following drilling of the Waitangi Valley-1 unconventional well in the East Coast Basin.

Statements contained in this news release that are not historical facts are forward-looking statements that involve various risks and uncertainty affecting the business of TAG. Such statements can be generally, but not always, identified by words such as “expects”, “plans”, “anticipates”, “intends”, “estimates”, “forecasts”, “schedules”, “prepares”, “potential” and similar expressions, or that events or conditions “will”, “would”, “may”, “could” or “should” occur. All estimates and statements that describe the Company’s objectives, goals, forecasts, guidance, production rates, test rates, optimization, timing of operations, and or future plans with respect to the drilling in the Taranaki and East Coast Basins are forward-looking statements under applicable securities laws and necessarily involve risks and uncertainties including, without limitation: risks associated with oil and gas exploration, development, exploitation and production, geological risks, marketing and transportation, availability of adequate funding, volatility of commodity prices, environmental risks, competition from other producers, and changes in the regulatory and taxation environment. Actual results may vary materially from the information provided in this release, and there is no representation by TAG Oil that the actual results realized in the future would be the same in whole or in part as those presented herein.