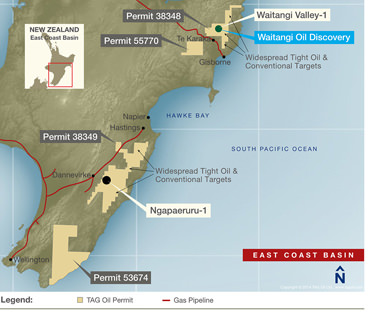 Vancouver, B.C. – May 5, 2014 – TAG Oil Ltd. (TSX: TAO) and (OTCQX: TAOIF) announces that the Gisborne District Council has granted TAG consent to drill the Waitangi Valley-1 well (TAG 100%), located in Petroleum Exploration Permit 38348 in the East Coast Basin, New Zealand. Earthwork activities are already underway to build an access road and drilling pad, with construction expected to be fully complete and drilling rig mobilized to the site by the end of June. Waitangi Valley-1 will be drilled to a total depth of 3600 meters, with the well targeting the naturally fractured Waipawa Black Shale and Whangai source rock formations.

The Waipawa and Whangai formations are regarded as high-quality source rocks that compare technically to successful commercial tight-oil plays in North America, such as the Bakken Shale and Eagle Ford discoveries. The potential oil resource in the source rocks on TAG’s acreage is significant by world standards, with independent assessments on TAG-controlled lands estimated at an undiscovered resource potential of approximately 14 billion barrels of oil initially-in-place. The mid-range P50 assessment considers approximately 20% of TAG’s total land holdings, while the source rocks are interpreted to be widespread and, more importantly, accessible on a much greater area of the Company’s 1.5 million acres. The Waitangi Valley-1 well also has significant conventional discovery potential within multiple Miocene-aged formations in an area where oil has already been discovered under significant pressure.

Waitangi Valley-1 will be the first modern deep exploration well drilled in the Waitangi Hill area: The historical Waitangi-1 oil discovery in 1912 produced 50 degree API sweet light crude from an oil reservoir at approximately 300 meters depth1. Geotechnical work done on oil samples taken from the Waitangi-1 well, which still produces live oil to surface today, and nearby oil seeps and oil samples from the five shallow Waitangi Hill wells TAG drilled in 2011, conclusively confirmed the “oil kitchen” is working and the underlying Waipawa and Whangai Formations are the source of this high-quality, movable oil making these naturally fractured oil and gas source rocks a prime unconventional exploration target.

“We are extremely pleased to receive this consent and we thank the Gisborne District Council for their diligence leading to this decision,” said Garth Johnson, TAG Oil Ltd. Chief Executive Officer. “The Waitangi Valley well is one of TAG’s high priority exploration prospects which was technically validated through work in our previous joint venture with Apache, and therefore we are very excited to drill this well. It is our vision to establish the country’s first unconventional oil production and prove commerciality of this potentially very large resource.”

1 Such information is derived from a variety of publicly available information from government sources, regulatory agencies, public databases or other industry participants (as at the date stated therein) that TAG believes are predominantly independent in nature.

Undiscovered Oil Initially-In-Place (equivalent to undiscovered resources) is that quantity of petroleum that is estimated, on a given date, to be contained in accumulations yet to be discovered. The recoverable portion of undiscovered petroleum initially in place is referred to as “prospective resources,” the remainder as “unrecoverable.”

The significant positive factors that are relevant to the resource estimate are:

The significant negative factors that are relevant to the resource estimate are:

Certain information in the Information Materials may constitute “analogous information” as defined in NI 51-101, including, but not limited to, information relating to the areas in geographical proximity to the lands held by TAG. Such information is derived from a variety of publicly available information from government sources, regulatory agencies, public databases or other industry participants (as at the date stated therein) that TAG believes are predominantly independent in nature. TAG believes this information is relevant as it helps to define the reservoir characteristics in which TAG may hold an interest. TAG is unable to confirm that the analogous information was prepared by a qualified reserves evaluator or auditor or in accordance with the Canadian Oil and Gas Evaluator Handbook. Such information is not an estimate of the reserves or resources attributable to lands held or to be held by TAG and there is no certainty that the reservoir data and economics information for the lands held by TAG will be similar to the information presented therein. The reader is cautioned that the data relied upon by TAG may be in error and/or may not be analogous to TAG’s land holdings.

Statements contained in this news release that are not historical facts are forward-looking statements that involve various risks and uncertainty affecting the business of TAG. Such statements can be generally, but not always, identified by words such as “expects”, “plans”, “anticipates”, “intends”, “estimates”, “forecasts”, “schedules”, “prepares”, “potential” and similar expressions, or that events or conditions “will”, “would”, “may”, “could” or “should” occur. All estimates and statements that describe the Company’s objectives, goals, and or future plans with respect to the drilling in the East Coast Basin are forward-looking statements under applicable securities laws and necessarily involve risks and uncertainties including, without limitation: risks associated with oil and gas exploration, development, exploitation and production, geological risks, marketing and transportation, availability of adequate funding, volatility of commodity prices, environmental risks, competition from other producers, and changes in the regulatory and taxation environment. Actual results may vary materially from the information provided in this release, and there is no representation by TAG Oil that the actual results realized in the future would be the same in whole or in part as those presented herein.