Will disruptions and production ever re-balance?

Global oil disruptions are at their highest level in the past five years, which typically leads to supply problems in the near term. In May alone, for example, disruptions caused production levels to drop nearly 3.6 million barrels of oil per day according to the USEIA.

Why the drop? Political disputes seem to be the primary cause: Nearly 90% of unplanned disruptions in the first five months of 2016 were caused by conflicts in Venezuela, Libya, and Nigeria. In addition to the unrelenting and damaging militant attacks in Nigeria, especially, disruption to oil and gas production have come in the form of massive wildfires in Canada through June. 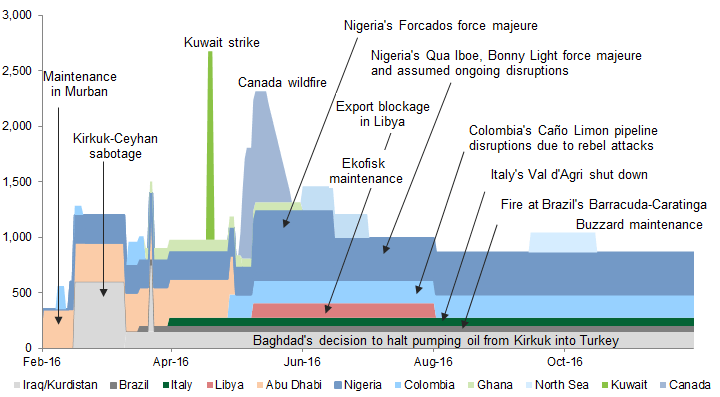 One would assume that oil supplies would rebalance after May, but OPEC has gone one better, actually increasing oil output and hitting record highs in June, increasing production from 250,000 bpd to 32.82 million bpd. These production highs have been reached even as Saudi Arabia and Russia set new production records themselves, and as Iranian oil supply levels continue to increase since western sanctions were lifted in January.

With OPEC operating at such a high production rate already, analysts worry that they won’t have the bandwidth to balance out future disruptions with additional stepped up production. Disruption plus no ability to rapidly increase production equals unexpected price shock, which isn’t a formula that energy consumers look forward to.

Disruptions can come in many forms: technical failures, natural disasters, political upheaval, and terrorism, to name a few. And when it will strike – and the duration it will be felt – can never be known ahead of time. Disruptions can change our global oil supply from glut to undersupply without warning, so it’s important to firmly situate one’s company – and one’s energy investments – to balance these opposing and constant forces.

For TAG Oil, our goal is to continue to stabilize and increase our production levels, both for the sake of financial stability and for the time when the inevitable disruption occurs that the current glut can’t mitigate, and oil prices rise once again.