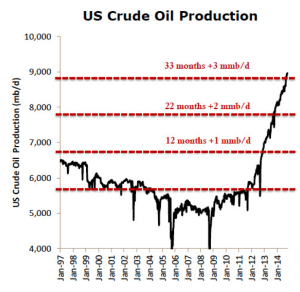 While the dynamics of the oil and gas business are never simple, it’s fairly easy to identify the primary culprit in the current oil price slump: fast growing production out of North America, particularly light oil in the US from the shale revolution.  Production was up almost a million barrels a day each of the last three years. However what goes up, must come down, and here we are down in the trough. That cyclical reality also sets the stage for a  recovery in oil prices.

Production in shale oil wells declines very quickly in their first and second years, and there are a lot of first and second year wells out there. In addition to shale’s fast decline rate, US shale oil is an expensive oil to produce. At current prices operators can’t afford to drill enough to keep pace with the rapid decline. If shale oil wells need high oil prices to make money from day one, that tells us this high level of initial production from shale wells can’t be sustained, and will in fact, decline quickly.

While they’ve held on longer than some pundits thought back in April, the market always adjusts itself eventually. 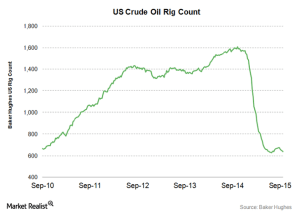 But the bigger reason the market could be underestimating how quickly North American oil production will decline is the rate at which typical US shale oil well decline: by up to 70% in the first year. This rate forces the industry to keep drilling at a feverish pace to keep filling the pipeline, and drilling at a feverish pace isn’t something that’s going to happen at today’s oil price.

(Compare those decline rates to TAG’s conventional production decline of about 15%, and a netback that allows us to make money, albeit not much, even at $40 a barrel Brent pricing.)

Today’s oil prices mean less incoming cash flow from oil sales.  Less cash flow means fewer wells can be drilled, and while that’s tough for us all, it’s unsustainable for a long period of time for US shale producers. The industry says they can make money at $80/barrel for WTI oil (West Texas Intermediate pricing) but the reality is only a few truly can turn a profit large enough to keep growing. 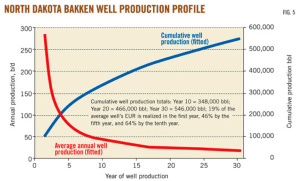 There’s another  important fact almost nobody talks about—most producers in the US get $8-12/barrel lower than WTI.  If one area or basin produces more than the local refining capacity, they end up having to discount their barrels to get the refineries to take them.

Factor in that producers get  $1-$4/barrel below that as their field price—so at $80 WTI, producers are only getting $69-$70/barrel. Then factor in about another $30 per barrel in G & A costs and debt payments, and US shale producers need $100 per barrel plus to start even thinking about profits. Or paying back their debt.