Here’s one of the first photos to come in from TAG Oil’s Ngapaeruru-1 wellsite, spudded on April 22nd. Our exploration team is targeting the Waipawa Black Shale and Whangai source rock formations at an anticipated depth of 1,800 meters to test the unconventional discovery potential in this portion of New Zealand’s East Coast Basin. 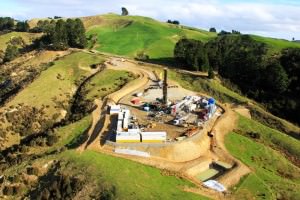 This is another step in TAG’s long-term strategic plan: to leverage the success — and cash flow — of the Company’s lower risk conventional assets in the Taranaki Basin, in order to intelligently pursue higher impact exploration opportunities elsewhere in New Zealand.