With all our recent financial news and Cardiff’s deep drilling updates, shallow oil and gas developments at Cheal and Sidewinder have gone under-reported lately. This post should bring you up to date!

Even as flow rates have stabilized, development and step out drilling are delivering excellent results. The Cheal-E1 step out well, which was placed on production last November, defined TAG’s newest producing oil site. The addition of Cheal E substantially extends the oil-saturated area of TAG’s Cheal field, and to date has produced about 90,000 bbls of oil. Current stabilized production is about 650 bbls/d of oil per day (455 bbls/d net), plus solution gas from three wells.

In the current 2015 fiscal year, TAG is slated to drill five more shallow development wells within the Cheal and Greater Cheal area. Four of these wells will be drilled with a 100% interest; one well drilled will be at a 70% interest in the new Cheal-E site acreage.

AtCheal South and Southern Cross, a 50-50 joint venture with East West Petroleum in a non-core operating area, TAG has already drilled four shallow exploration wells and one exploration side-track well. Three of them are being plugged and abandoned, while one, the Cheal-G1 well, is currently planned for production testing as a potential new discovery…we’ll keep you posted!

Over at Sidewinder, we 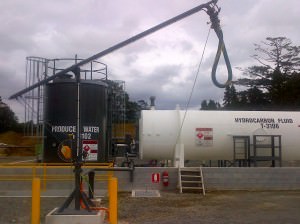 have two exploration wells planned in the Sidewinder-B site, which target 3D seismically defined anomalies, which we interpret to be oil-prone prospects. Our exploration team has made the decision to focus this next round of wells on oil, based on the decline rates of Sidewinder’s gas wells. Again, we’ll let you know how things proceed. [Photo: Loading arm to fill Sidewider oil tanks.]

All of the seven wells mentioned here were identified from TAG’s proprietary 3D, and we consider five of them to be the lowest possible risk in our portfolio. So while we’re casting a bigger net to pull some higher-risk, higher-potential prospects into our drilling portfolio in FY 2015, our low-risk shallow drilling strategy to fund our other activities remains in place.