Last month, the TAG Oil team was hard at work restoring the land from our Taranaki Southern Cross site so that it could be handed back to its owner. This is a very important procedure, and not one many people are familiar with. But it’s the final step of a well site called reclamation, that returns the land back to its original – or better – state.

Responsible land reclamation actually starts at the time of site preparation, when a Drilling Pad is first constructed. Although constructing large drill pads can increase initial costs, they’re beneficial in several ways: they can hold multiple wells, and they allow rigs to hydraulically “walk” to the next well, which causes less surface disturbance. This form of drilling also decreases the oil and gas production footprint.

When all is said and done and a site is ready to be closed down, several steps need to be taken. 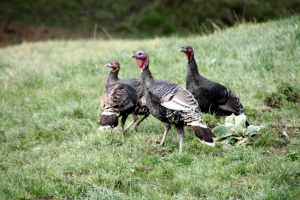 As seen in this photo, the wildlife is not disturbed, and we often find ourselves working alongside sheep and wild turkeys as we restore the well sites that we’re finished with