The International Energy Agency (IEA) released a report last week stating that oil and gas will be the foundation of the world’s energy supply for the next 25 years.  The forecasts for oil demand are set to reach 103 million barrels per day by 2040, and natural gas demand is growing at an even faster rate, with an anticipated growth of 50% by 2040.  At that time, oil and gas will make up over half of the world’s energy consumption.

The report was well received by New Zealand’s petroleum body, Petroleum Exploration and Production Association of NZ (PEPANZ). New Zealand is only producing out of Taranaki at this time, but there are several other promising sedimentary basins still to be explored.  As the IEA estimates that a shortfall in oil could begin to emerge in early 2020s due to low levels of global exploration, New Zealand, along with TAG Oil, are well positioned to meet future demands.

PEPANZ CEO Cameron Madgwick commented in a release issued by PEPANZ, “While we need to be cautious, international interest in New Zealand’s oil and gas potential is strong and exploration activities are occurring in a number of locations around the country.” He continued, “A significant find could result in a billion dollars of both new investment and export earnings, as well as a significant increase in royalties paid to the government.”

As oil prices have stayed low, New Zealand has seen a decline in exploration, along with many other parts of the world. But international interest in New Zealand has remained strong. TAG Oil focused on New Zealand many years ago due to its stable government, the proven track record in the Taranaki Basin, the country’s strong infrastructure, and the premium oil that is produced.  The potential in New Zealand remains strong and as prices pick up, so will exploration. TAG Oil will be one of the first, when that happens. 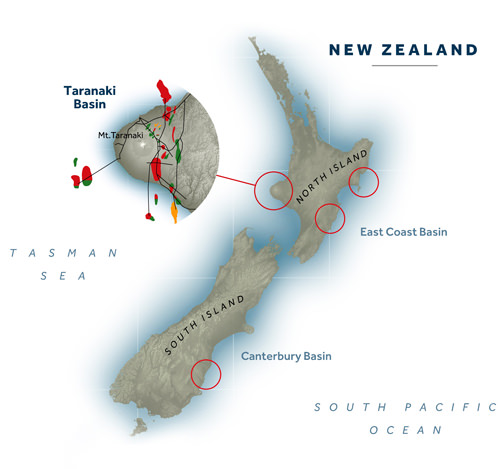