In early October we were delighted to sign a formal partnership agreement with Ngati Ruanui, whose traditional tribal lands extend from Hawera to Stratford, in the Taranaki. This was a high priority for TAG, and we worked diligently to get here, as it forms the foundation for a long, strong and mutually beneficial relationship for years to come. 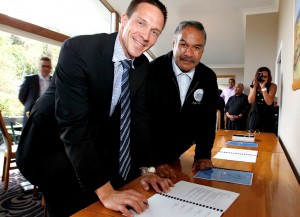 The agreement is based on a number of critical guiding principles that recognize the aspirations of both TAG and Ngati Ruanui. As CEO Garth Johnson has said, “We want many of the same things: to be economically successful but never to the detriment of high environmental standards.” One practical example is Ngati Ruanui’s environmental team having archaeological oversight and monitoring rights for any earthworks TAG carries out in the region.

Again, Garth Johnson: “This agreement is based on mutual trust, respect, and quality of life. To me, it means we have each others’ backs.”