Next Steps and Video of TAG’s Cardiff 3 Well

As we reported in TAG Oil’s December 6 press release, the initial flow testing on Cardiff 3 well was a success!

The Cardiff field sits below TAG’s producing Cheap field, and the Cardiff 3 well test produced gas and condensate to the surface from the deeper Kapuni formation.

The Kapuni name has deep roots in New Zealand. It is named after the nearby Kapuni Field, which was not only New Zealand’s first major gas discovery, but it is also the second largest onshore gas/condensate field in New Zealand, having produced 1.4 Tcf of gas and 65 Mmb of condensate to date.

The next step for TAG on Cardiff 3 will include further long term testing to support the commercialization process and updating the resource estimate, which currently sits at 160 Bcf of P50 best estimate gas initially in place and 5.5 Mmb of condensate initially in place, as reported by Sproule in accordance with NI 51-101 requirements.

For now though, click the picture to check out this video and see the results for yourself. 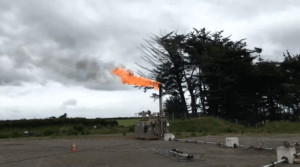