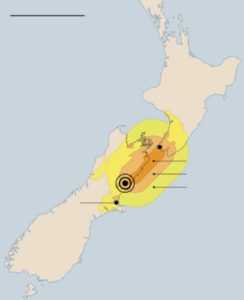 Epicenter and area where the quakes have been felt

Early Monday we were alerted to the news that a series of powerful earthquakes had struck New Zealand’s South Island.  The first quake of 7.8 magnitude hit the east coast of New Zealand’s South Island at midnight, triggering tsunami warnings and later, fortunately, waves of just a meter high.  Hours later, another strong quake measuring 6.4 struck the same region, northeast of Christchurch around the small town of Hanmer Springs.  The South Island has since seen hundreds more tremors.

As aftershocks continue even today, our warmest regards and condolences go out to everyone who has been affected by these terrible events.  As for the TAG Oil team—including staff, board members and contractors—everyone is safe, with no reported injuries or damage.  The earthquake was felt by many on the North Island and around Plymouth, where houses swayed and creaked for roughly two minutes during the initial temblor, but thankfully people and property in the north near TAG headquarters were unscathed.

New Zealand sits on a collision zone between the Indo-Australian and Pacific tectonic plates and is part of a horseshoe-shaped belt around the ocean’s edge where many earthquakes and volcano eruptions occur called the Pacific’s “Ring of Fire.”  In 2011, Christchurch was devastated by a 6.3 magnitude quake that resulted in 185 dead, thousands injured and a city reduced to rubble.  While these recent quakes are just as massive, they’re further from dense population centers.

As the epicenter was roughly 500km from the Taranaki Region where TAG Oil’s assets are located, TAG Oil took the precaution of shutting the plant down for an hour to make a detailed assessment of infrastructure and facilities: after careful inspection, there were no signs of damage and the facility was put back online.

We are keeping the people of New Zealand in our thoughts and hearts, and we’re keeping our ears open for any help that TAG Oil can provide. For some photos, videos and more news, here’s a link to the BBC.