Electric cars are no longer a dream of the future. And come on, who doesn’t turn their head when a Tesla drives by? By 2030, the Paris climate deal is looking to have 100 million electric cars on the road, approximately 6.6% of the world’s car fleet.  Sounds notable, right? Even sounds like it could be a major force in slowing down the continual increases in oil demand growth.

Actually, it would only reduce global oil demand by 1.2 million barrels, according to BP’s long-term energy outlook.  And who’s to say 100 million EV’s will hit the roads? The Obama administration had only hit 40% of their one-million-EV-target by 2015.

Don’t get us wrong, we’re all for electric cars. But passenger cars only make up 20% of oil demand and despite the estimated doubling in EVs by 2040 to two billion, they’re not the main drivers of oil demand.  The significant factors are industrialization, global commerce, improving living standards, and marine, air and truck transport.

Statoil, known to be a conservative forecaster, is estimating oil demand to reach 106 million by 2030. 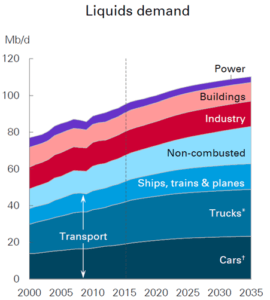 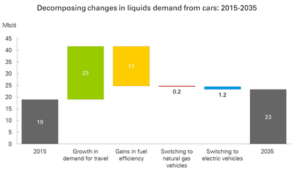