The oil industry is one of the most capital intensive on the planet, and without significant amounts of capital to reinvest, production starts to decline. When production declines, oil prices tend to rise to a point where additional capital investment makes sense…at which point more oil is brought online…which increases supply to meet demand. The cycles come and go based on the demand/supply equation.

The recent oil price drop was driven by excess supply.

Wood Mackenzie (a global energy consultancy) put out a recent report highlighting that more than $1 trillion dollars in spending has been cut from exploration and development budgets globally. These cuts will likely lead to slower growth in production which is needed to offset global production declines and increased demand. Around $300 billion is estimated to have been cut from global exploration budgets (from 2015-2020), and more than $700 billion has been cut from development projects.

That’s a lot of money that is not going into the ground.

To put it in a slightly different context, if we assume that it costs $100,000 per barrel per day to add production (this is likely conservative and an over-estimate) then $1 trillion in capex cuts would equate to 10 million barrels of production (supply) that potentially won’t make it to market over the next five years. That’s a significant potential reduction in supply and, as they say, a very good cure for low oil prices in the future. 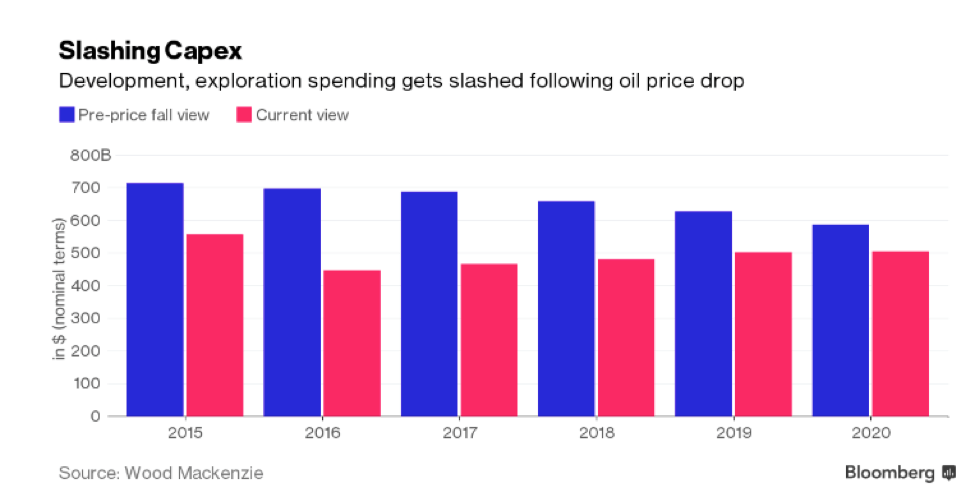