Another light oil discovery at Cheal 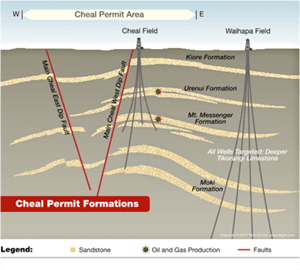 We put this cross section together illustrating the formations we’re intersecting, including Urenui, Mt. Messenger and Moki.

PEP 38156 (PMP 38156) came through. We drilled Cheal-B4ST to a total depth of 1810 meters, encountering 17 meters of net oil-bearing sandstones within the Urenui and Mt. Messenger Formations. Electric logs show great porosity and permeability, indicating four separate zones are likely to be oil-charged. Two of the four zones intersected are oil-bearing zones never before encountered in wells within this permit…demonstrating that the whole 7500-acre permit area is oil-prone, with multiple shallow horizons prospective for discovery.

Now it’s on to flow testing and the rest of the planned wells in our Taranaki Basin acreage.